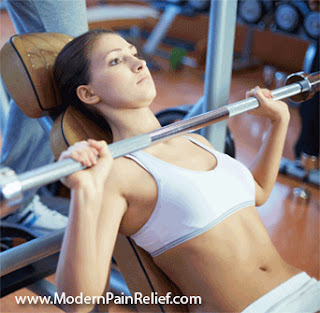 Muscle pain is something that is easy to overlook. Since it’s usually a mild dull pain and does not hinder daily activities unless at an extreme stage, people tend to wait too long before consulting a physician.

A muscular strain can be identified by other common household names such as a spasm, cramp or a pulled muscle. These pains are usually associated with the neck, shoulders, and even pain in the lower back.

Causes of Muscle Strain
Muscle strain may be caused by over stretching of the muscle which cause the muscle to tear or cramp. This over stretching can occur as a result of physical exertion. Over exertion may even lead to permanent muscle damage and may even be triggered by daily activities. This may lead to limited and painful movement (Holmes, 2011).
First degree strains such as those caused by a crick in your neck do not usually result in permanent muscle damage.
Second and third degree strains, however, may be caused by high pressure activities such as:
Symptoms of Muscle Strain
Symptoms exhibited as a result of a strain may vary according to the degree of the injury and should be carefully evaluated in order to avoid permanent muscle damage (NYU Langone, n.d.).
First Degree Strains
Typical symptoms which may also be experienced in first degree strain include:
Second Degree Strains
Second Degree Strains may exhibit additional symptoms such as
Third Degree Strains
Third degree strains which involve a tearing of the muscle may also exhibit the following symptoms:
Diagnosis
In case of a muscle injury which may have been caused due to unusual physical activity, its best to go to a physician for a diagnosis. Before diagnosis, the doctor may ask certain questions about your lifestyle at work or at home. In addition, the doctor will want to know when you noticed the symptoms and whether any irregular physical activity was done. Once diagnosed the doctor may suggest rest and placing ice on the strain. Additional treatments may include:
Some problems may be aggravated over time simply due to incorrect posture. Your doctor may tell you about the appropriate posture which may help avoid future injuries (NYU Langone, n.d.)

Restoring Quality of Life with NeuroProsthetics

Leadership in the medical community is comprised of an array of difference makers.  Many have committed to the noble profession of providing...